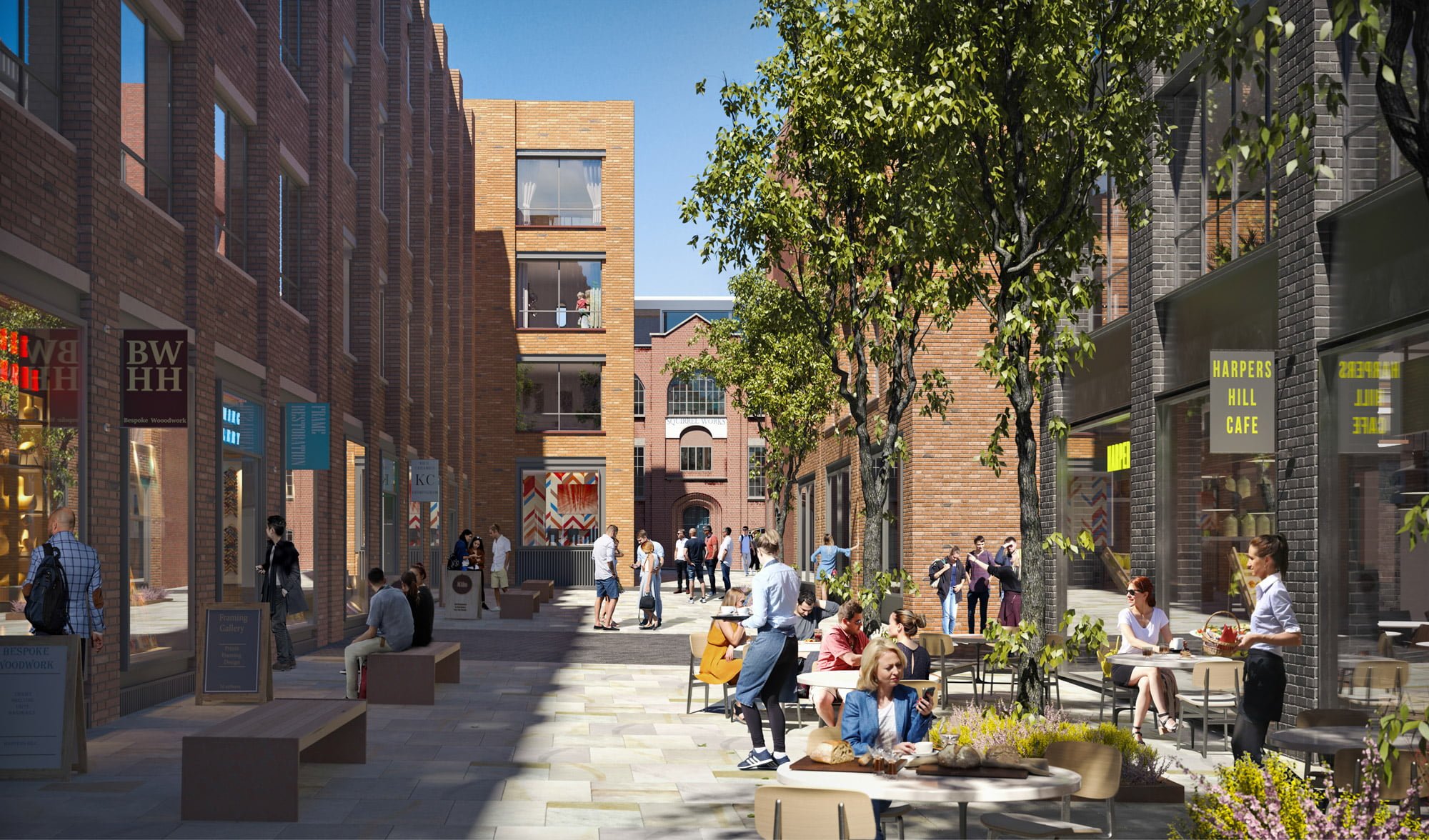 Plans to transform the four-acre AE Harris industrial site in the Jewellery Quarter into a major residential-led, mixed-use scheme have been given the go ahead by Birmingham City Council.

Designed and master-planned by award-winning Glenn Howells Architects, the £125million scheme, which is bounded by Newhall Street, Graham Street, Brook Street, James Street and Northwood Street, will comprise 305 apartments – including lofts and duplexes – and circa 100,000 sq ft of commercial space, including affordable business and retail space, across 20 buildings, as well as new public realm.

A new pedestrian street will stretch from Newhall Street into the heart of the Jewellery Quarter, improving access from the city centre. Northwood Street, currently partially closed to the public, will be opened to pedestrians for the first time in more than 20 years.

A new public square will be incorporated, in the centre of the scheme, surrounded by commercial and leisure space at ground level.

As part of the developers’ plans, two Grade II listed buildings will be restored to their former glory. 109 Northwood Street, built in 1882 for military ornament makers Brent and Parker and described by Historic England as “internationally significant”, and 199 Newhall Street, a neo-Georgian factory built in the early 20th century, will be repurposed to provide much needed new workspace in the district.

A further two derelict buildings – 123 and 128 Northwood Street – will also be salvaged and transformed into new homes. Although not listed, the joint venture team consider them architecturally significant.

Care has also been taken to respect buildings flanking the site. The previously hidden Grade II listed Arts and Crafts era Squirrel Works on Regent Place, for example, will be exposed and visible the length of the new pedestrian street called Harpers Hill.

Stephen Conway, executive chairman of Galliard Homes, said: “The Jewellery Quarter’s historic buildings give the area its special character. Galliard has a track record of restoring listed buildings across London and we are looking forward to bringing this experience to Birmingham.

“123 and 128 Northwood Street have a familiar typology to the Jewellery Quarter, with street frontages concealing rear factory wings.  These two buildings reinforce the grain of the area, running north-south. It’s therefore right that we respect their heritage and preserve them, despite their lack of listed status.”

The new buildings at the site have been designed to be sympathetic to the historic area. These include an Art Deco inspired façade, which wraps around the corner of Northwood Street and James Street; an elegant dark brick and crafted metal marker building at the Newhall street entrance to the scheme – visible from Colmore Row – to house a co-working operation; The Cornerstone, at the crossroads at the heart of the scheme, includes terracotta elements, as does the red brick building on Regency Place, with both providing homes above active ground uses, including shops and businesses.

Robin Norstrom, a director at Apsley House Capital, said: “This development will be the largest within the Jewellery Quarter Conservation Area.

“We have invested more than two years in bringing this highly anticipated scheme forward, working with the local community and with the city’s planning officers to create a new gateway to the Jewellery Quarter and an animated hub – not only a place to live and work but also a destination in itself. The scheme will introduce more than a kilometre of street frontages to explore, with the majority of the public spaces being car free.

“As well as new homes, the scheme’s ground floor commercial space will provide opportunities for up-and-coming independent businesses, whether that’s local heroes or brands new to the city. We are also keen to support jewellers and artists by providing affordable retail and business space.”

Dav Bansal, director at Glenn Howells Architects, said: “The sensitive proposals to reconnect and unlock this site strive to create a fine grain of streets and courts that reflect the intense character of the Jewellery Quarter. The approach has been to carefully restore some existing fabric alongside a new composition of modern buildings which share a considered palette of materials, detailing and proportions.

“The variety in scale, level changes and order of facades bring an interesting streetscape while the choice of brickwork textures and tones add to the distinct quality of each building. We believe this new setting sits sympathetically in its historical context, bringing much needed workspace, amenities and homes to the quarter.”

More than 500 jobs are expected to be created at the scheme, including construction posts and jobs in the food, beverage, retail and office sectors. The development is anticipated to take four years to complete.